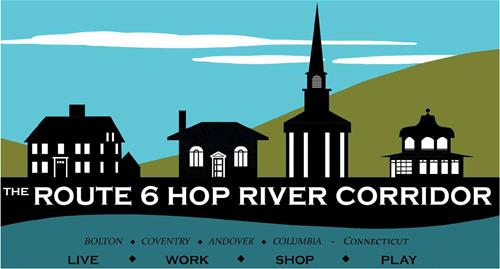 On November 9, 2005 representatives from the Towns of Andover, Bolton, Columbia and Coventry met to discuss the concept of a regional approach to economic development along Route 6. A Memorandum of Understanding and a Mission Statement was reviewed and was later adopted by the member towns' governing bodies. Through the Memorandum of Understanding, the Route 6 Regional Economic Development Council was created. The member towns are desirous of: (1) working together to promote economic development along Route 6 and the immediate areas adjacent thereto and (2) creating a cohesive plan for development within the Route 6 Corridor. The corridor begins at the junction of Route 6 and Route 44 in Bolton and extends east through the Towns of Bolton, Coventry, Andover and Columbia to the Windham Town line via Route 66E.

The goals of the Route 6 Economic Development Council are:

Begun in 2005, the Route 6 Regional Economic Development Council (Route 6 EDC) received funding in 2008 to begin the Route 6 Planning Project. The Route 6 Planning Project was defined as a project to explore, define, and consider what was the economic development potential of Route 6 was. The Study Area was defined as from the intersection of Route 44 in Bolton, CT and continuing through Coventry and Andover. The project also included Route 6 in Columbia, CT but continued to the Windham Town Line along Route 66.

A Request for Qualifications was published in the fall of 2008. After an extensive screening and interview process, a consultant was brought onboard and the project began in earnest. The consultant team consists of LADA, P.C. Land Planners (Project Managers / Landscape Architects / Planners); Garnet Consulting Services (Economic Development); Frederick P. Clark Associates (Traffic); and Nathan L. Jacobson & Associates, Inc. (Engineering).

The project goals were defined in October 2009 as:

In keeping with Goal #1, the Route 6 EDC focused on trying to re-vision Route 6. As part of this process, a new name and logo were created for this project. The name, as shown on this website, has been defined as:

This new name identifies the two significant documents of the Study Area — the road (Route 6) and its context (Hop River Valley). To further define a new vision of the corridor for the future, a logo was chosen from nearly 40 alternatives considered. This logo is part of the top banner of this website.

On October 25, 2010, Route 6 Economic Development Council adopted the Route 6 Regional Economic Development Strategy and Master Plan Study. After nearly two years, this report includes a new vision for the Route 6 Hop River Corridor. The report is attached or copies can be reviewed at each of the Bolton, Coventry, Andover, and Columbia Town offices. Please note that the files are quite large and may take some time to load. In some cases, the maps and figures for an individual chapter may be in multiple files. This is especially true for Chapter 9 — Existing Environmental Setting.